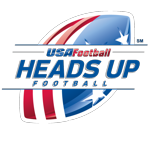 Pop Warner football has been around since the inception of the league in 1929 by founder Joseph J. Tomlin as a four-team conference in Northeast Philadelphia. Since then, participation has steadily increased to today's record numbers. Over 240,000 youths participated in Pop Warner-sanctioned football programs in 2004, and those numbers are continuing to grow.

Kids compete with kids of similar age and size. Pop Warner is the ONLY youth football program (local, regional and national) that sets and enforces a strict AGE & WEIGHT MATRIX that reduces the risk and reality of injuries.

*The asterisked provisions in each division allow the so-called "older but lighter" player to also qualify. The last year of eligibility falls under more stringent weight restrictions, per above.

A child's age on July 31 is his/her age for the season.